Live ‘desk tapes’ of semi acoustic events rarely capture a balanced impression of a performance because they are usually splits of the PA mix, which by definition includes only those sources that need amplification: anything relatively loud on stage, such as electric guitar etc, is under-represented. For these recordings, I modified the small Soundcraft 200B mixer I was using to allow the mixing together of 3 sources:

During soundcheck, if there was one, and periodically through the show, I would check the recording mix using headphones and attempt to find a general balance that would work for the recording, but as the club was fairly small and I mixed from a tight position among the bar crowd and only about 6 meters from the stage, clear monitoring was difficult and compromised by the sound in the room.

The approach and available equipment evolved over time as I put together a live mixing rig as an alternative to the in-house system built into the stage amp rack that bands were otherwise left to set themselves. The earliest recordings offered here, made shortly after acquiring my PCM-F1 recorder, were made using the Schoeps room mic only, and the technical shortcomings of these, along with what I wanted for the PA mix, informed how the system developed. With all real estate forward of the railings around the stage required for diners, I set up in the bar area each week, a position that became very crowded and cosy on a busy night, and packed up my system at the end of the run. 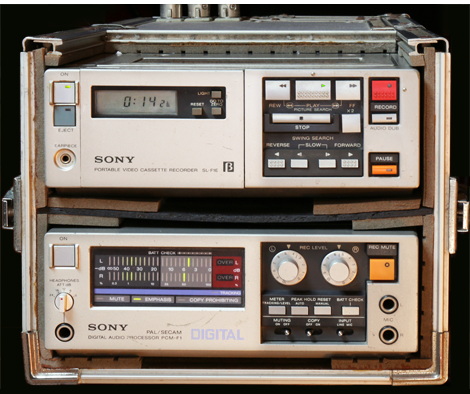 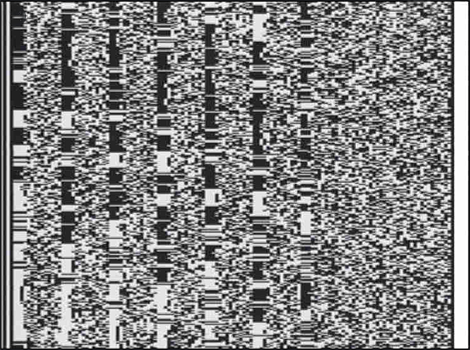 My battle weary system and what the PCM video stream looks like.

Recordings were all straight to 2 track stereo using the first Sony PCM-F1 portable digital recorder imported into Australia. This was a cut down version of Sony’s 1610 CD mastering processor which recorded the digital audio stream as a monochrome video signal, using a pattern of black and white squares to represent digital ‘1’s and ‘0’s. While the 1610 recorded to U-Matic video tape, my PCM-F1 signal was recorded to a portable domestic 1/2″ Beta deck designed as a complimentary recorder for the processor. This was definitely first generation digital audio, and so far from perfect, but even so, offered significant improvements over the cassette recorders normally used for this purpose up until then. It is a testament to their design, that the units still work perfectly and the tapes play back as they did at the time.

I was reminded when revisiting these recordings that there was no processing anywhere in the system. We didn’t even have graphics over the foldback speakers, which were the same Bose 802s as the main PA. The only control other than levels, was via the fixed, 4 band EQ on the Soundcraft 200B mixer channel strips (12kHz and 60Hz shelving, and 5kHz and 250Hz peak/dip). There was no dynamic control at all, although I now realise that the contained space of the club resulted in acoustic compression which gave useful density to the live sound.

An Ursa Major 323 Stargate reverb unit was the last important part of the system, intended to give some air and spatial dynamics to the live mix, but it therefore found its way onto the recordings. If it seems a bit heavy handed at times, remember it was the ’80s and it took a while to get over the exciting possibilities of these new digital tools and attempt some subtlety. Acknowledgement is due to business partner and long time friend Lana Lazareff who stumped up the money for this device and generously left it in my care for more than a decade.