For most, the Basement was synonymous with the name of it’s founder and driving force, trained chef and passionate jazz fan Bruce Viles. Bruce was a mercurial character, an aspect which earned him the respect of Sydney musicians and the quietly shared nickname ‘The White Pointer’, but he held unwavering convictions about social equality and fair play and his burning enthusiasm for music was matched only by his generosity, meted out daily in small yet significant and unexpected gestures that often went unnoticed by all but the direct beneficiaries. Like many of the musicians he went out of his way to support, it is fair to say that Bruce was in it for the music, not the money, and he made this passion his life’s work. This photo was taken by The Australian shortly after the 1983 renovation that added the open upper floor.

The club did a lucrative trade catering for business lunches (this was the age of the ‘liquid lunch’) and usually didn’t close until well into the early morning, so more than one team was required to cover the bases. Chris Richards joined the Basement as a manager and became such an indispensable fixture – the night time face of the club – that he later became a partner when the venue reopened in the new building built on the same site, but with it’s doors just up the lane. Consequently, you will repeatedly hear artists thanking this pair on these tapes.

This period was at the end of the analogue age – before personal computers, the internet and smart phones transformed our world – and so there are surprisingly few photos and scant documentation in the public domain about the club during this time. I am chasing more images, but am grateful to Karin and Katherine Viles for sharing what they have, which includes the architectural drawings with final revisions, used below, for the renovation that added a second floor to the club. Jack-hammering out an opening in the upper floor so that upstairs patrons had a view of the stage was significant acoustically, as it opened up the sound as well, giving valuable air and height above the stage. Also, the PA speakers were multiple Bose 802s, which with their 8 x 4.5″ speakers in each box meant that even at elevated levels, they could be placed close to listeners and the sound was present yet diffuse. This played an important part in spreading the sound evenly throughout the venue while keeping the focus on the stage. The fit-out was a team effort and the signature wood panelling shows Bruce’s handiwork. 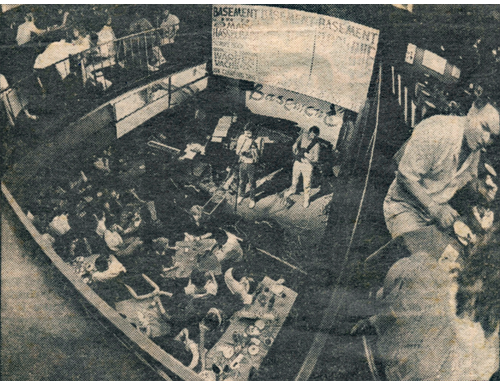 The newspaper photo to the left, which the poster above the stage advertising Mark Hasselbach and Warren Vaché dates as from February 1987, gives a sense of the upstairs audience experience.

It shows Galapagos Duck in full flight, so would have been from a Friday or Saturday night when punters turned out in force to enjoy an established favourite. Touring and more musically diverse artists were generally showcased earlier in the week.

A monthly program, such as that for February 1988 shown below, was printed and made available to club patrons as a way of letting them know what was coming up over the month ahead, and it was not unusual for there to be at least a couple of significant or visiting artists featured. As you can see from the cover charges, a night out, during a time when there were less entertainment options at home,  was ridiculously inexpensive – and arguably a lot more fun! 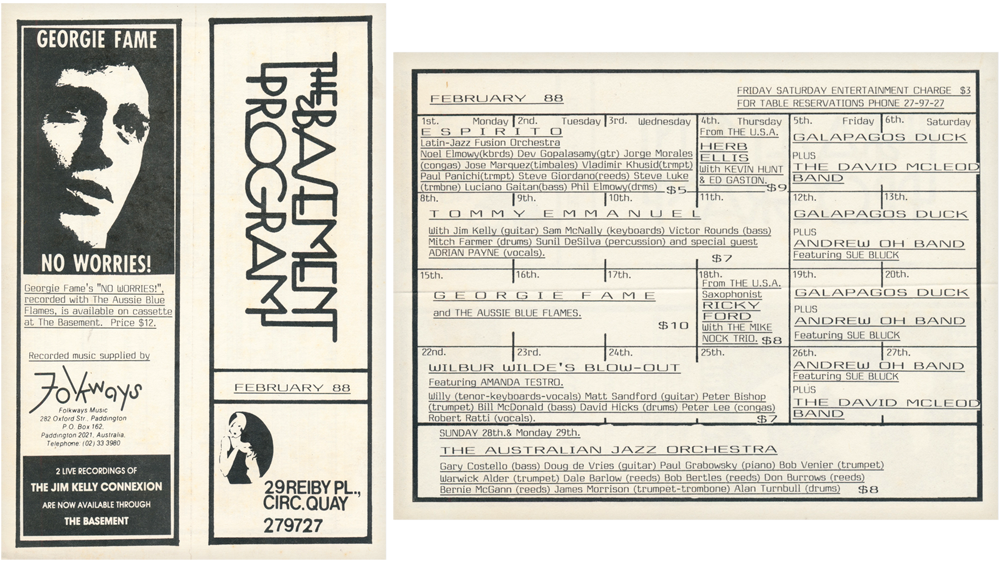 The plans below show the layout of the club and hopefully give a sense of it’s feel. The club had a rich and warm ambience thanks to the mahogany stained wood panelling used throughout. This was further enhanced by dark brown carpet and deep blood red paint. Soft white was used to lift some walls, all of which were covered with posters or photographs of the many musicians who had graced the stage. 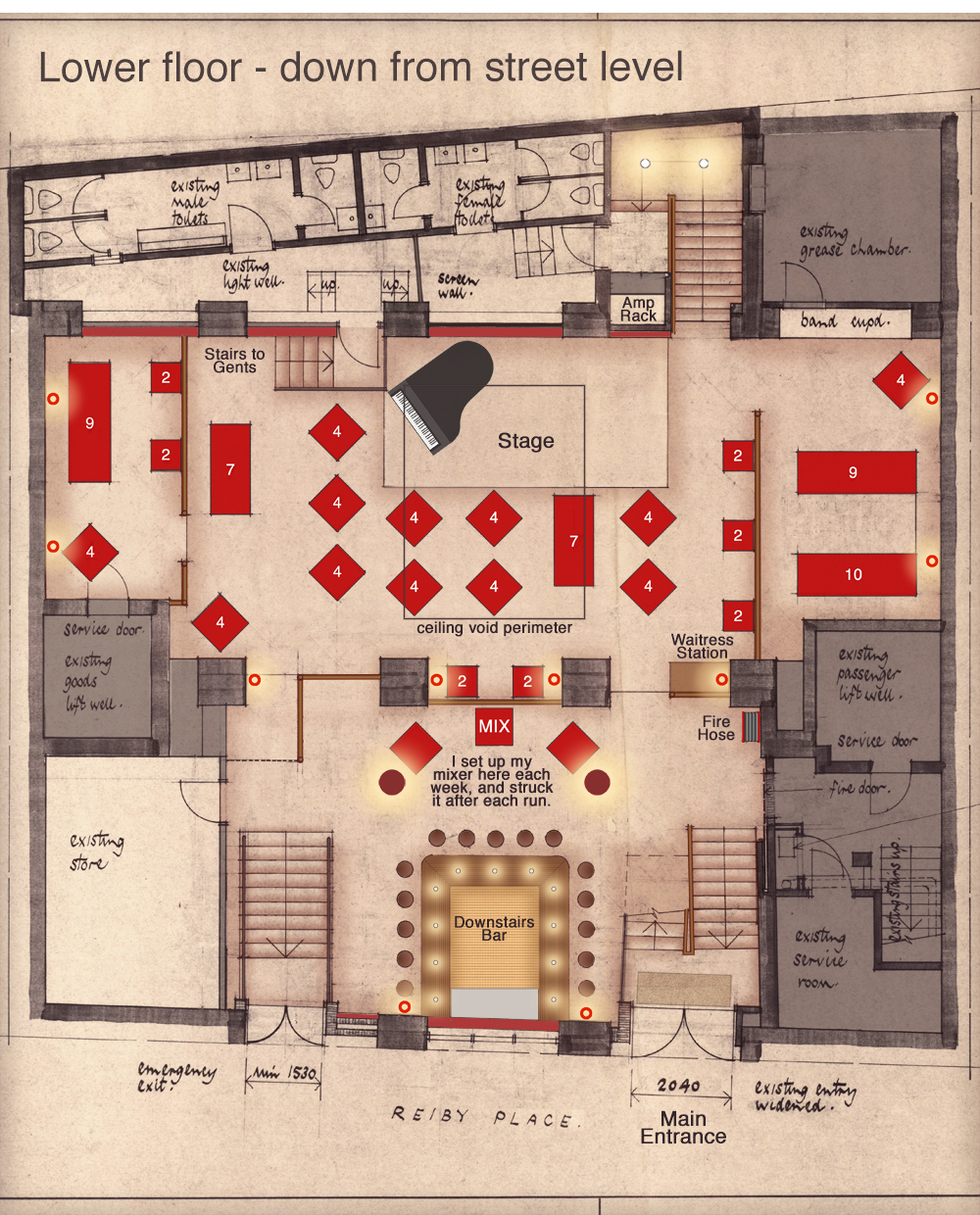 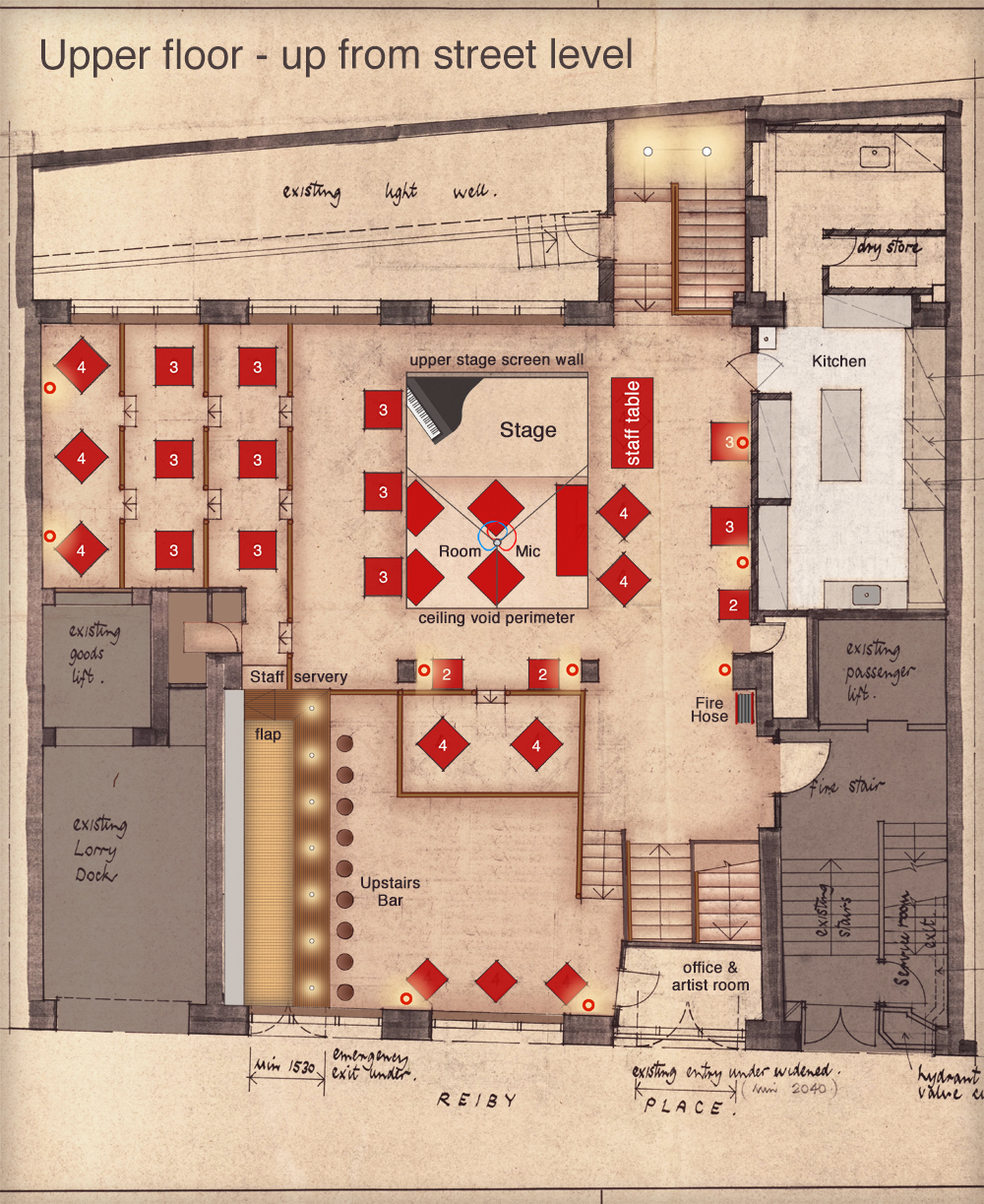 This period pre-dated the digital age. You may notice that everything shown here, such as architectural plans and promotional artwork, all bear clear evidence of human imprecision: nothing is quite square. There were no computer layout or drawing tools and in music, no quantisation or Auto-Tune. As a result, the pursuit of any notion of perfection had to be worked at, but even when attained, there were always the small and idiosyncratic shifts that revealed the spark of creativity. Musicians allude to this as ‘feel’  – and there’s no app for that.